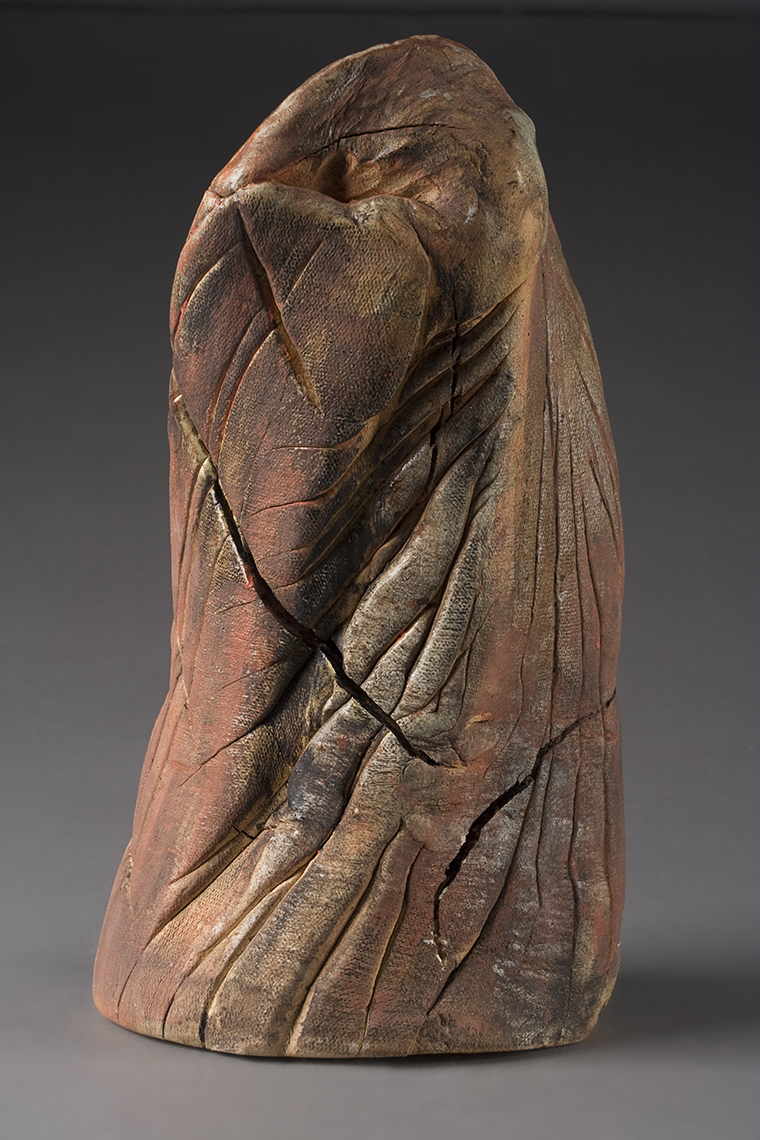 Clay is occasionally called a hydrated alumino-silicate. Calm down, this will be brief and may actually be informative. To place these words into context one could say that clay is an earth which is a hydrous-layer alumina-silicate (ideal form Al2O3, 2SiO2, 2H2O) and often shown in an analysis of: SiO2 45.11%, Al2O3 38.99%, Fe2O3 0.46%, TiO2 1.46%, CaO 0.12%,  MgO 0.04%, K2O 0.06%, Na2O 0.03%, traces and combustibles 13.97%.  Kaolinite is its principle mineral.
Take a breath, this is only one slant on the real stuff.
I indicate that clay is ‘occasionally’ called a hydrated alumino-silicate. As a potter and therewith, a ceramic artist, my interest in clay is dominantly artistic-physical and secondarily scientific.  In many art circles, we would rather say that “clay without art is mud”.  Even as we call clay ‘mud’, however, we know it is a special category of mud.  Clay is a plastic earth, which means that it can be shaped, formed, rolled, cast, pressed, twisted, bent and endlessly manipulated and still hold the form or shape it has been given.1
It is super fragile when dry.
Naming this post with a subtitle, “material time” was not undertaken by chance. Think clearly of time without the presence/existence of matter, if you will, or can! (Personally, I think you cannot! More on this in other places.)
Clay is matter: the stuff of physical objects like plates, bowls, vases, coffee mugs, spark plugs and ceramic sculptures. This physical stuff is found and mined around the world in the most diverse places imaginable, and more or less by all groups of peoples and cultures throughout humanity’s wide, long and diverse history. It is therein shaped, fired and shared with other humans, the occasional god and even other animals.
I have an enduring curiosity about the nature, appearance and substantiality of material stuff: clay happens to be a close-at-hand, ideal example. Actually, the world (in the very large sense of the word) is absolutely chock-full of material things. Perhaps it is that these same material things (which by chance, includes what is popularly called, ‘the observable universe’), are the actuality of space itself—more on this later. In the current age, we tend to think everything in the world is material, i.e., matter: cars, mountains, human beings, ants, cups of coffee, cats and dogs, food, our brain and its firing neurons, and so on. Is there anything which we know about, which is not material? I did say “anything which we know about” which is a very obscure thing to say just out of the blue. Humans often like to talk about ideas, thoughts, feelings and mental images—even the ‘self’, which we usually consider not to be material things.
This becomes more confusing before the real discussion is over. Physical matter, mass, energy—I will return to this set of words on a regular basis.

As a material stuff, clay is very, very old, and by this, I do not mean only that human beings began to work, play and create with clay several millennia ago, which they did. Clay itself, however, is older than all of humanity put together. Its deep life lay in granite — ‘protoclay’. In this respect, clay is thus a sound example of “matter”, the stuff of which most of us, most of the time, think is what makes up very common objects and things.
The reason I introduced the chemical language, formula and typical analysis above, is to highlight a more recently developed concept (19th century onward), of what matter, the stuff of things, is taken to be in the 20th and 21st centuries. It is still the “stuff”, but the traditional and physical notion of matter is now highly nuanced (atomic and subatomic theory, quanta, wave-particles, the ‘standard model’ in particle physics, and so on…), and in some circumstances, even abandoned. We are fortunate to be alive in an era of dramatic advancements/transformations of humanity’s long-held notions of the world, of matter, and of nature as a whole.
That’s great, but lest we forget, we too, are material—and that will render our understanding a bit more complex, if not to say, obscure.