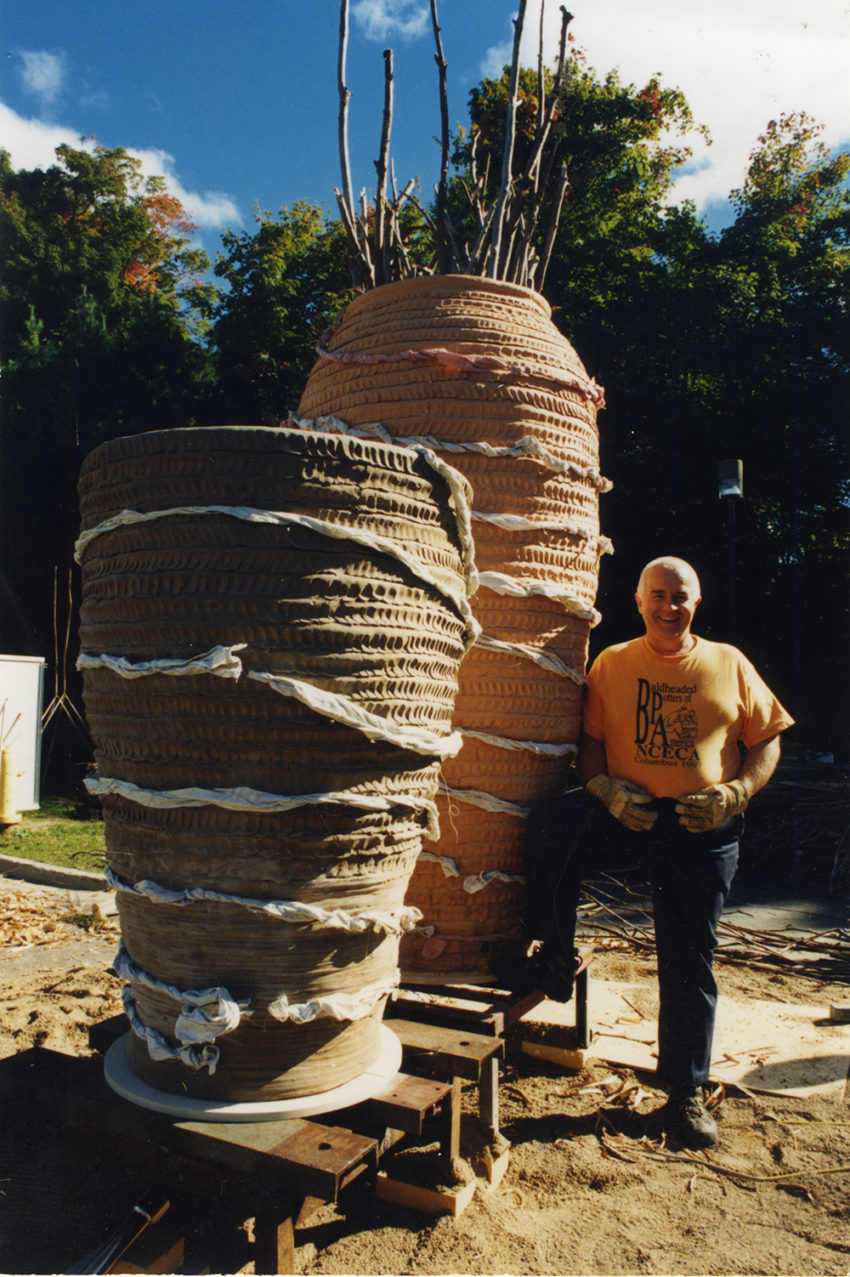 A bowl is such a simple object: open, balanced, a spatially-structured circle, a foot, a lip, a receptacle. But to make a bowl is an adventure and a loving challenge.

It is difficult to visualize labourers whose artistry is more immediately sensuous than that of potters shaping supple, moist and plastic clay as it spins beneath their hands on the potter’s wheel.  The embodiment of graceful and appealing forms, as fingertips caress elastic and often sumptuous clay, is a paragon of creative making which is centuries old, and yet flourishes anew with every freshly fashioned pot.1. below
Clay itself seems to be one of the richest embodiments of matter, the stuff of things. In some traditions, clay is said to be the very stuff out of which we humans ourselves, seem also to be made (Genesis, Isaiah, Qur’an, etc.). Clay has come from mountains, magma, granite (protoclay), pressure/weight, storms, ice, grinding, wind, water, through eons and ages—time outside of and beyond thought. It is mud. When fired in the potter’s kiln, however, it once more becomes stone, though not through eons of time. That actuality comes to be, rather, though the creative art of carefully managed, very intense heat—in a weekend! This is the art of crafting substantial and real matter, imbuing its function with beauty and life. Transubstantiation of the vulgar, but not magic!

A simple object—a clay bowl fashioned as we say, by the human hand. Simple? In the vernacular, being simple carries a general connotation: to be straightforward, easier to do, explain and understand, not complex/compound. Even at the simplest level of physicality — shaping clay on a potter’s wheel — everyone who has ever tried to shape supple clay into a pot on a wheel already knows, however, that this is not a smooth undertaking and certainly not simple. And yet, it is only moving plastic matter into new shapes — usually only with the human hand, muscles and energy. The potter’s body, mine, for example, directly works on and interacts with the earth’s unique mud: clay.
The dynamic relation of our hands, shoulders, back and torso with the luscious and sensuous stoneware is such a specific instance of a body to body interplay. We humans are physical matter and mass entwined in a creative dance with the physical matter and mass of the clay.
Fortunately (we say), for reasons of what we call the scientific advances in our model of the material world in the 19th, 20th and 21st centuries, we now seem to know that all matter, clay included, is composed of atoms and molecules and therewith, sub-atomic particles (and forces, fields, energy, quanta, and so on…). This network of scientific thought has hidden complications for those humans amongst us who work creatively and imaginatively with clay in studios with our hands, bodies, brains and minds. We are people after all, humans and nothing else! Things, as they say, are not as simple as they appear. (Democritus, Plato’s allegory of the cave, and all the interwoven tales and traditions to one side.) These few words open a world which will become elusive before too long. I like it, but it ain’t straightforward. So, get a grip!
Making and creating are often the same undertaking, and occasionally they are distinct one from the other. This is so, not only in language, but also in fact. The facts of the world are not only our words for it! More on this later, for sure.
There are long traditions which hold that creating is the realm only of the gods/god, with their superior capacities and intense, if not omniscient and omnipotent, scope. Some accept the notion that to create is to bring something into being from nothing — by fiat. Many hint that to create means to give deep order to the chaos of primal existence — chaos, logos, cosmos.2. In many respects, our traditions, language/s and other historically-sensed, inter-subjective bonds, encompass us to this day, and are subtly still at play in our functional, daily lives.3.
As is the case with real-world compasses, these heritages and affiliations indifferently lay out paths, ways and guides. They are a complex within which we act, usually within a belief system and a structured picture of the ‘whole’ world. But compasses are compasses — often life-saving, but they are not the world they indicate, lest we forget in our thankfulness for having a guide.
While I think of being able to make pots, and to create similarly imaginative and real things as a gift, I accept that they are gifts without a giver — other than human life. This is the same life which brings with it, the actual panoply of human efforts, dreams, ravages, knowledge, as well as its collaborative and rapacious actions. Not simple, not surprising! More to come — that’s for sure! PS

1. The Art of Earth and Fire ; 2. Usually thought of as religion, theology, theological/traditional philosophy, and so on; 3. https://en.wikipedia.org/wiki/Sapiens:_A_Brief_History_of_Humankind
PS. When we consider any actual thing, whether it be considerably smaller than something we can easily imagine, or dramatically larger than anything we have ever even begun to wonder about imagining, we sense and know that in itself, this thing is something, and not nothing. We do not know what it is in itself, which is to say, apart that from how we take it to be, or how we learn about it, or come to know things about it.
Knowing, sensing, feeling, guessing, believing and such similar states are of course human undertakings, dramatically interdependent on/with our actual existence. We ourselves are not another thing but the humans we are. We are what we are. And just as the other things are not nothing in themselves, so also we are not nothing in ourselves. And, painfully, in both cases we still do not really know what the ‘in itself’ is.
Well tough! Do we really think the standard model of particle physics will render this clear and comprehensible? Thinking of that order is like seeing with our eyes in sleep. Imagining is not seeing even though it is a form of thought. It is imagining!