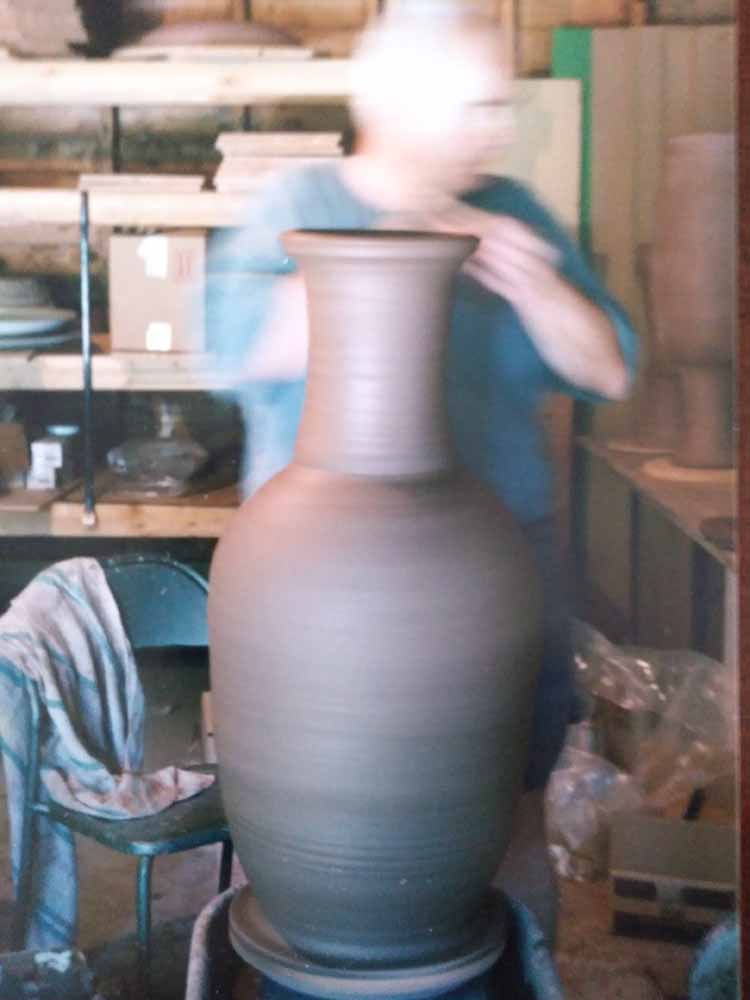 This pot is as hard as rock. I take its structure to be somewhat ethereal because it just happened to come to be. It didn’t exist and then it did. I made it as this particular thing-form, with my manipulative hands immersed in clay on the potter’s wheel in my studio. It could have been any one of innumerable structural shapes, but by whim, plan and fancy, it is this particular one.
Rock, that most solid of things in the materials world, is, itself, a passing phenomenon. Granite, itself, is what I often call ‘protoclay’. Rock structures have already been transformed from granitic mountains into plastic clay. Unlike my making of the jar, however, the time frame of a disintegrating mountain is impossibly long, but in the context of all existence itself, it, too, is trivial and ephemeral, and yet, for me, long-lasting.
What is this thing, this lidded jar?2.
How could it be that one object is so many parts, aspects, elements, tasks and steps and still be ‘one’? This question is a slight variation on the philosophical problem called, ‘the one and the many’. It will return in many different guises to give us pause for thought in various posts on this blog—face it: simple things are complex!

Making a pot like this lidded jar, is a very physical task and somewhat taxing from a muscular point of view in addition to the necessity of multi-sensorial and mental focus. Being a potter is physical labour, akin to aesthetic brick laying. I remember calculating that to take a finished piece out of a kiln, I had already handled the clay, which constituted the material substance of that particular pot, between 30 and 40 times from the first moment of having the clay—30 to 40 times per piece! Potters in most contemporary settings, certainly in or near urban environments, get their clay from suppliers. I say this to remind you that working with clay is an exacting, physical undertaking and to recall to your thinking that clay itself is profoundly material. While it is true to say that clay is a natural substance—it occurs in nature by itself—it is also a manufactured material in contemporary society: but it is still ‘matter’.

Potters and ceramic artists live in a material world, and when their work is fired, it will easily outlast its creators by decades, centuries, and occasionally millennia—barring being dropped on a cement, stone, or ceramic floor. While it may last for an indefinitely long period of time, that is not in itself what we mean when we say that it is ‘matter’. So, what is this matter? And of course, what does the word ‘what’ mean. What would we, or you, like to know when we ask, what does it mean to say that clay is material, i.e., is matter? The English language often uses nouns which convey the sense or idea that what is meant by the word is some sort of substantial thing like a shoe, a spaceship, a cloud or even an idea. This adds power and influence to the language while bringing with it a plethora of feeling, thinking and explanatory conundrums. These filaments are interwoven with everything I write, and probably with what you say and think.

Of course, the simple picture of seeing or handling the jar, skips over the common knowledge of the modern age, namely, that all matter is made up of molecules and atoms. I say ‘common knowledge’ because that idea is so fundamental to how modernity tries to understand the ‘physical’ world in which we live. We are even at the stage of understanding that the material stuff stuff of the world—the molecules made up of atoms—is such that we also now acknowledge that atoms themselves are ‘made up of’ sub-atomic particles, different forces, waves in energy fields, and so on…

This is an exciting and occasionally bewildering world. These thoughts and notions were never very far from my mind as I ‘wedged’ clay, ‘threw’ a bowl, trimmed a foot, dried, glazed and fired the pot. And, sometimes, irreverent questions and felt doubts, flashed across my sensing organism as I shaped that lovely, sumptuous and plastic clay with my hands, fingers, fingertips and muscular exertions. Surely, surely, my hands are not shaping and moving molecules? The skin of my fingers is in direct, sensed, physical contact with the clay—non? That is what I feel, and because of years of practice and experience, that is what I know is going on, non? I’d like to make a vase—then I make one. So, what’s up? 3.

More on this later…and then, even later…